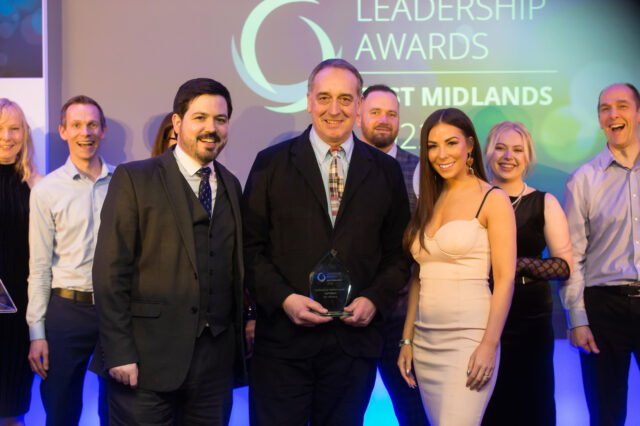 Carl took the title in the Professional Services category of the awards, run by TheBusinessDesk.com

The nomination focused on his leadership of the structures team at BSP, his role in supporting the early adoption of BIM, his support for apprentices and junior members of staff, and his recent move to managing director of the company.

Sam Metcalf, Midlands editor of TheBusinessDesk.com, said: “The standard of this year's entries for the East Midlands Leadership Awards were the highest they've ever been, so for Carl to be crowned in this category is testament to his vision, skill and progressive attitude towards leading BSP Consulting. A richly deserved champion.”

BSP founding director Mark Rayers said: “Carl has played a key role at BSP since he joined the business 16 years ago – helping the firm to grow and develop into where we are today…one of the leading independent civil and structural engineering firms in the East Midlands. His role in the introduction of BIM has been crucial to BSP’s development and has put us in a very strong position for the future.

“Carl stepped up to become MD last year and has already shown strong leadership in his new role. We are absolutely delighted that he has won an award in the 2022 East Midlands Leadership Awards in recognition of his work.”

The awards took place at The Crowne Plaza, Nottingham, on 10th March 2022.

Following the award Carl said “I definitely see this as a TEAM award and I felt it was important that we ALL went onto the podium to accept it. It was a really strong category and I know that all the nominees will agree with me, in that the effectiveness of any organisation is a reflection of how strong the team is within the company. I know at BSP we have an exceptional team that delivers great engineering consultancy advice to our clients and this is what drives our success. On behalf of the entire team at BSP we were proud to accept the award”.

Headquartered in Nottingham and with offices in Derby, Leicester and Sheffield, BSP is one of the largest independent civil and structural engineering firms in the East Midlands, having been founded in 1999.

The company offers a complete range of consultancy services to all sectors of the construction community, from architects, project managers and contractors to developers and estate agents - operating nationwide to offer expertise in civil, structural, transportation, geotechnical and environmental engineering.