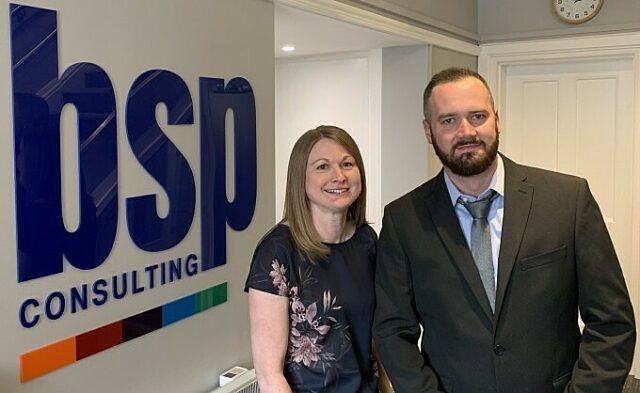 Two professionals who have spent all or the majority of their careers at East Midlands civil and structural engineering firm BSP Consulting have been promoted to senior roles at the company.

Joanna Posnett and James Payne have both been appointed as associates at the Nottingham-based company, which also has branches in Derby, Leicester and Sheffield.

BSP Consulting director Mark Rayers said: “Jo and James have both been with us for many years, and we are grateful for their ongoing efforts and commitment to BSP. They both thoroughly deserve their associate positions, having stepped up in their areas of responsibility and taking on wider remits over the last year or two. It will be great to have them on the management team.”

Joanna gained experience at Nottingham City Council and Bettridge Turner & Partners before joining BSP’s Nottingham office in April 2005 as a transportation planner before moving up to senior transport planner. She subsequently set up the transport team at BSP’s Leicester office, and was later promoted to principal transport planner in 2013.

A graduate of the University of Hull and Nottingham Trent University, and a member of the Chartered Institute of Highways and Transportation, she manages the transport team in the Leicester office offering client-focused transport planning services, from site access feasibility studies to Transport Assessments and Travel Plans to accompany planning applications, expert witness for planning appeals, and highway design (with specialisms in traffic sign design and Traffic Regulation Orders).

She completed a Diploma NVQ in Management last year, along with five other members of BSP’s team.

James Payne joined BSP’s Nottingham office as a school leaver in August 2001, as a civil engineering technician and undertook his block-release training locally. He became IT manager and civil engineering technician in 2004, before taking on the sole role of IT manager three years later. In 2017 he was appointed finance and IT manager, and now heads up finance, IT and also oversees the administration department.

BSP, which is based at Oxford Street, Nottingham, provides a comprehensive range of consultancy services in civil, structural, geotechnical, transportation and environmental engineering to all sectors of the construction community, from architects, project managers and contractors to developers and estate agents. It was founded in 1999 and operates across the East Midlands and the UK.