Jessops and BSP on board with Lancaster Bomber sculpture 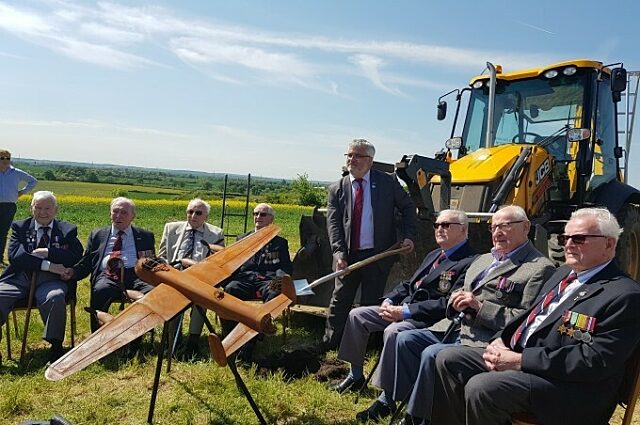 Nottinghamshire-based firms Jessops Construction and BSP Consulting are playing key roles in helping a Lancaster Bomber sculpture get off the ground.

The ambitious Bomber County Gateway Trust Project involves creating a full-sized, Lancaster Bomber art installation on Brills Farm, immediately adjacent to the A46 in Norton Disney between Newark and Lincoln. The aircraft sculpture, made entirely of steel, will be suspended in mid-air giving the impression it is heading ‘home’ to RAF Swinderby a short distance away.

As one of the key sponsors, main contractors Jessops Construction will be involved in the project construction, drawing on their wealth of experience in design and build, having successfully completed over 100 major developments nationally since the company’s inception in 2000.

This project is particularly poignant for Managing Director of Jessops Construction, Richard Wherry, whose great-uncle Sergeant Alan Dabbs enlisted as a Royal Air Force Volunteer Reserve on 50 Squadron and served as an Air Gunner on R5902 Lancaster.

He said: “We are honoured to be involved in the construction of this fitting tribute to those who have given their lives for their country, many of which died very young. The project will be overseen by our experienced team who, together with members of the Bomber County Gateway Trust, aim to create an iconic landmark that the whole region can be proud of.”

Jessops Construction also involved the Nottingham-based, award-winning, civil and structural engineering firm, BSP Consulting who they have collaborated with on a number of varying projects.

BSP Director of Structures, Carl Hilton will be leading the project on the firm’s behalf. With more than 25 years of design and project management experience, he is looking forward to being involved in this exciting and unique project. He said: “Engineers at BSP are hugely experienced at structural engineering design for everything from multi-storey structures to individual bespoke construction projects, but this is a truly unique scheme that we are so proud and delighted to be a part of. It’s not often you are asked to design a structure to give the impression that a life-sized plane is flying.

“Our team has relished the challenge to get involved and create suitable designs for the structure of a sculpture that will be such an important and visually inspiring landmark.”

Trustee and Project Director Ken Sadler commented: "In line with the Trust's stated aim to involve local businesses in the project, we are delighted to benefit from the expertise offered by Jessops and BSP. The success of the project depends on a strong team of engineers, construction professionals and project managers and, in collaboration with these firms, we have a cohesive and capable team that shares our vision for the project."

The ground-breaking ceremony, held on 15th May was attended by many decorated veterans, including George ‘Johnny’ Johnson, the last British survivor of the original members of no. 617 “Dambuster” Squadron RAF, emphasising the importance of this project to both serving and retired service personnel.

It is certain that the installation will echo landmark features in other large cities such as the Angel of the North in Tyne & Wear, the Horses in Falkirk, Sheffield’s proposed Man of Steel, the Kent Horse and the Wrexham Dragon.

Planning permission for the sculpture of the Avro Lancaster in flight was unanimously granted by North Kesteven District Council in April.

The plane will have a wingspan of 31m and will be mounted on a 10-12m stand, reaching a height of 30m above ground.

The trust continues to raise funds for the project however work on site has commenced with ground investigations which are currently taking place. Construction is expected to commence over the coming months.

A Just Giving page for donations to the project has been set up, and donations can be made here https://www.justgiving.com/crowdfunding/bombercountygateway