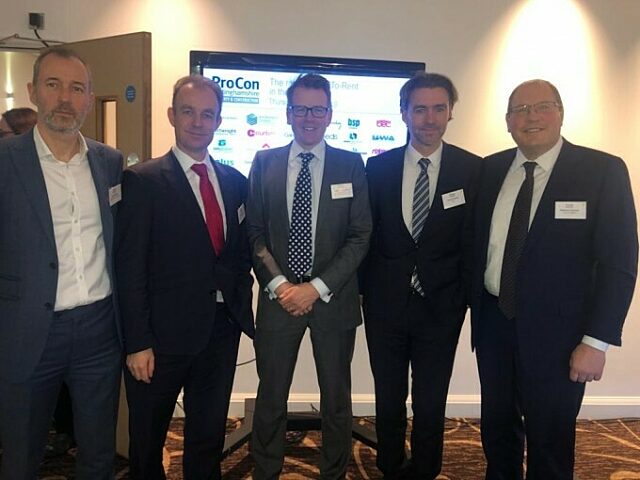 WHILE it was London which was the focus of the private rental sector (PRS), the regions are not just catching up but are set to overtake the capital within five years.

So said James Mulcare of Godwin Developments at the latest event by ProCon Nottinghamshire, the membership organisation for the regional property and construction sector.

James was one of four key speakers at the ProCon event called The Role of Build-to-Rent in the Regions and its Increasing Popularity, held at Trent Bridge with more than 100 people in attendance.

“The build to rent and private rental sector (PRS) started in London, with international investors feeling comfortable with the capital. But then their sights turned to the regions,” said James of Godwin, which recently announced its successful planning application to build The Landmark - 202 apartments for rent in Derby.

“Now it is the regions which are hugely benefiting, and this is set to continue. Major regional cities like Nottingham, Derby and Leicester are seeing a huge growth in both PRS and build to rent.”

And while 90% of build to rent is in city centre apartments, which typically attract millennials, renting a home is now appealing to families. While it was the 25 to 34-year-old bracket wanting to live in rented accommodation, the figures have shifted – with 35 to 49 year olds wanting to rent on the rise.

“We are seeing more interest from families wanting to rent because it’s easier when they choose to be close to amenities – such as schools and leisure,” added James. “Rather than focusing on city centre apartments, there are increasing numbers of two and three bed houses under construction.

“When developing build for rent properties, we should keep the end user in mind. We should be treating people as customers, not tenants in the future,” he said.

James Badley of architects RG+P which specialises in this sector, said good design in PRS and BTR is absolutely key – in order to create sustainable developments where people want to live.

He said: “As most residential accommodation is moving towards the upmarket hotel feel, it is very important that there is the high-quality entrance space, high quality lounge space and outside space – with design not just dedicated to one area of the building.

“We have to provide high quality, robust, design which is attractive to tenants for a long-term proposition. People want to live in communities and when designing buildings, we have to be sure that we are providing solutions which will be here for many years to come.”

Matt Hannah of Innes England talked about the many BTR and PRS schemes locally which are being built. Along the waterside in Nottingham, Blueprint and KMRE are on site.

He said “PRS and BTR is happening and it is here to stay and major urban centres like Nottingham is going to see a lot more. People’s habits are changing. Rather than buying property, the demand for rental property in the UK is on the rise.

“That means that investors have an appetite for long term stable income with improved yields in the regions.”

Paul Seddon, director of planning and regeneration at Nottingham City Council, said: “Nottingham has a strong local long-term economy and it is getting stronger. A once in a generation transformation is happening in Nottingham.

“From a PRS and BTR point of view, we need more of it. We are at the start of creating a market and we are willing to flexible. We want to try and help schemes happen. We want quality and we want to ensure that we have the office developments we need as well.”