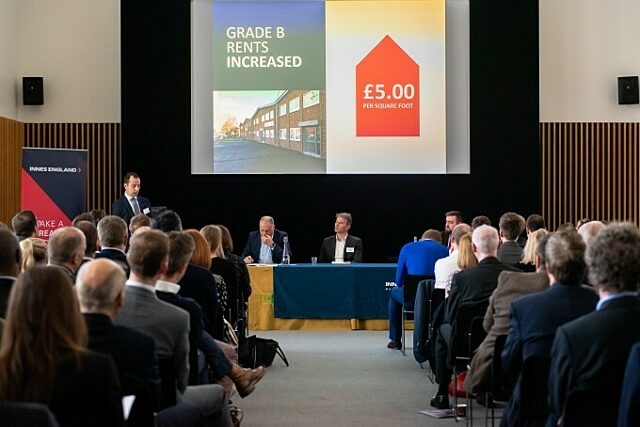 NOTTINGHAM’S office market was the standout performer in 2018 according to the city’s annual in-depth commercial property review published by Innes England, thanks to a pre-let at Unity Square to HMRC.

The 12th Market Insite report, which monitors trends in the regional property market focussing on Nottingham, Derby, and, Leicester also highlighted the city’s Southside regeneration where work has been underway to redevelop the bus station and car park. Work on the new Nottingham College, a 323-bed student scheme by Vita and the £45m PRS scheme by Cassidy Group has also begun.

In Nottingham, the 2018 report highlights:

Craig Straw, director at Innes England, said: “Without doubt, the star of the show in 2018 was the office market in Nottingham thanks to the pre-let to HMRC at Unity Square. This forward-funded scheme also had a positive impact on investment levels within the city, which reached £226.6m.

“The lack of stock continues to provide real challenges in the Nottingham office market but speculative refurbishments are planned for City Buildings and Cumberland House among others, and Bildurn’s 11 Station Street scheme includes 50,000 sq ft of new build space.

Retail activity in the city centre was dominated by intu Victoria Centre following the multi-million-pound refurbishment of its Clocktower dining area with McDonald’s as one of the key lettings.

Jack Ward, head of retail agency at Innes England, said: “Nottingham’s retail market is facing challenges just like the rest of the UK but investment at intu Victoria Centre and the planned redevelopment of intu Broadmarsh provide positive news within the city centre.

“Out of town, we have seen JD Sports acquire two new units – taking part of the former Toys R Us at Riverside Retail Park and the former Oak Furniture Land – who also took a larger unit themselves – at Victoria Retail Park.”

The regeneration of Nottingham’s Southside continued to dominate the city centre in 2018, with work progressing on the demolition of the bus station and car park ahead of construction of new facilities including the proposed new City Library.

Towards the end of 2018, the much-anticipated intu Broadmarsh redevelopment also saw the appointment of Sir Robert McAlpine as lead contractor with work due to start on site early this year.

“It’s fantastic to see these schemes coming forwards; the Southside has been a key priority for Nottingham for a number of years and we are all pleased to see cranes in the sky in the city – not just in the Broadmarsh area but around the train station, too,” added Jack.

“There is a great deal of activity taking place in this area of the city, being undertaken both privately and by the local authority, with the Southside regeneration really gaining momentum over the last 12 months.”

The industrial market was hampered by a lack of supply, particularly of Grade A space, with total take-up levels the lowest in five years at just 857,300 sq ft. Prime rents also remained static as a result of limited availability.

Craig said: “Supply has been an issue in the industrial market for the last couple of years, especially of good-quality stock, which has had a real impact not just on take-up but also prime rents.

“The vast majority of activity took place in the second-hand market, accounting for 97% of the year’s total. We also saw secondary rents rise to £5 per sq ft.”

Find out more at http://www.innes-england.com or join the conversation at @InnesEngland.